Made in China 🇨🇳, ships FOR FREE from Switzerland 🇨🇭.

Laser-cut from stainless steel and polished to a silvery sheen (other colors than natural are plated). Helps with spreading the love!

Oxytocin (Oxt) is a mammalian hormone that acts primarily as a neuromodulator in the brain. Oxytocin is best known for its roles in sexual reproduction, in particular during and after childbirth. It is released in large amounts after distension of the cervix and uterus during labor, facilitating birth, and after stimulation of the nipples, facilitating breastfeeding. Recent studies have begun to investigate oxytocin’s role in various behaviors, including orgasm, social recognition, pair bonding, anxiety, and maternal behaviors. For this reason, it is sometimes referred to as the “love hormone”. The inability to secrete oxytocin and feel empathy is linked to sociopathy, psychopathy, narcissism and general manipulativeness.
(Further reading about this astonishing molecule: Wikipedia)

Love is in the air! 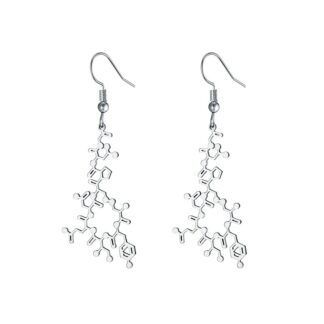