Made in New York USA or Eindhoven NL  (whichever is closer to you).
Learn more about how we make our products here.

You will get a serotonin and a dopamine molecule with hoops (the hoops are plated golds and silver, diameter: 20 mm).

The two most vital neurotransmitters in your brain, now attached to your ears 🙂
To get a minimalistic and beautiful design we have stylized the molecules and defined the functional groups of each molecule with spheres.

Serotonin or 5-hydroxytryptamine (5-HT) is a monoamine neurotransmitter. Biochemically derived from tryptophan, serotonin is primarily found in the gastrointestinal (GI) tract, platelets, and in the central nervous system (CNS) of animals including humans. It is popularly thought to be a contributor to feelings of well-being and happiness.

Dopamine (sometimes abbreviated DA) is a catecholamine neurotransmitter present in a wide variety of animals, including both vertebrates and invertebrates. Dopamine has many functions in the brain, including important roles in behavior and cognition, voluntary movement, motivation, punishment and reward, inhibition of prolactin production (involved in lactation and sexual gratification), sleep, mood, attention, working memory, and learning. 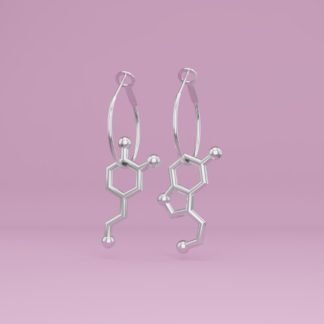